Numerous workplace conflict resolution approaches and tools exist to help ease tensions and resolve conflicts. The techniques mentioned in this blog are just some options available to handle chronic ongoing disputes among team members. Some of the options include:

Determining the underlying causes and contributing factors for ongoing disputes is essential to eliminate those conflicts. In some instances, the conflicting parties might point to specific events or encounters, but often, deep-seated conflicts result from a multitude of interactions, and the tensions accumulate over time.

The causes of workplace conflicts are unlimited, but most workplace disputes fall into a few categories, including:

Real or perceived slights include -- ignoring input, discounting ideas, failing to respond to e-mails or inquiries, dismissive responses in writing, interrupting comments during meetings, dismissive responses during meetings, the tone in addressing one another, or exclusion from meetings, activities, or projects. One instance could be enough to cause a person to be offended, but multiple instances will increase the tension and damage the working relationship.

Personality differences cause conflicts. As the Four Groups 4-G tool demonstrates, some work personality types work better together. Other work personalities are more prone to conflict and disagreement.

In addition to workplace personality differences, personality traits can exacerbate workplace conflicts. Personality traits that aggravate disputes include imposter syndrome, inferiority complex, insecurity, superiority complex, and overconfidence. Any of these traits can lead employees to take offense to actions or comments by others when no offense was intended. These personality attributes can cause hypersensitivity to being questioned about work assignments and can lead to misinterpretations concerning motives of others in the workplace.

Mediation provides a safe, structured, and focused space to examine the dispute, the underlying issues contributing to the conflict, and how to address the issues. The objective of a mediation is for the disputing individuals to reach an agreement to end the conflict. The ideal solution is one the parties develop themselves with the mediator as a guide to resolution. The role of the mediator is to facilitate conversation and not dictate the solution.

Mediation can be an empowering process. Rather than a manager stepping in to mandate a particular course of action, mediation allows the conflicting parties to craft the solutions for themselves. Mediation encourages the involved parties to generate their own options and develop their own plans for ending the dispute.

In terms of personal benefits, mediation allows parties to move beyond a simple binary view of the conflict with the help of a third-party neutral mediator. Often people come to mediations with very black-and-white perspectives. They often think they are the ‘victim’ fighting against a powerful, sinister “other.” Depending on the dynamics in an organization or on a team, those individuals may also feel like the managers or supervisors are biased against them or unfairly favor the other person involved in the dispute.

Mediators help the disputing individuals understand the other person’s perspective and see a deeper and more complex version of the conflict. In short, a good mediator will help the people involved in the conflict focus on the root cause of the dispute.

Using an impartial third-party to mediate the conflict avoids appearances of conflict or favoritism that can happen when managers or supervisors are involved in the dispute resolution process. One of the advantages of this approach is that the managers remain free from the conflict. The risks of perceived favoritism or conflicts of interest are likely when the person handling the dispute is the manager of one of the employees but not the manager of the other or when one of the disputants has been promoted or received superior raises from the manager handling the dispute resolution process.

An option available is to conduct a formal workplace conflict resolution mediation like an independent-neutral third-party mediator would. Workplace dispute mediation can take several different forms.

In a traditional mediation, all the participants are present at the same time at the beginning of the process. Gathering the conflicting individuals together for an opening caucus allows everyone to hear directly from each other about their perspectives on the dispute.

After the questions phase, mediators usually then hold separate meetings called “caucuses" with the disputing parties. During these private sessions, the parties can share concerns and complaints they want kept confidential.

Many mediators use the “what, why” method to determine the underlying reasons for the employee conflict. This technique involves asking the parties probing questions in sessions apart from the other employee.

Mediators ask variations of what the parties want out of the dispute resolution process. The “what” series of questions include:

The “what” questions typically lead to the BATNA, MLANTA, and WATNA inquiries. “BATNA” stands for “Best Alternative to a Negotiated Agreement” and represents what the disputing party believes would be the best outcome for her if there is no resolution to the conflict or the best outcome if she has no say in the resolution. In workplace disputes, sometimes the party’s perceived “best alternative” is to never work with the other person again. However, that is frequently not possible when the dispute involves two people on a small team.

The acronym “MLANTA” stands for the “Most Likely Alternative to a Negotiated Agreement.”  MLANTA is what the party thinks is most likely to occur if she cannot reach an agreement with the other person. Usually, parties in workplace disputes perceive the MLANTA to be the continuation of the status quo – they expect nothing to change and the stress, anxiety, animosity, and dysfunction to continue.

“WATNA” is the acronym for the “Worst Alternative to a Negotiated Agreement.”  WATNA is what the disputing party expects to be the worst outcome for her if she does not reach a resolution of the dispute with her coworker. Sometimes the employee perceives the worst alternative as getting fired or being forced to resign due to the conflict. The concern about the potential of being fired can be especially strong when the employee thinks management favors the other party in the dispute.

Below are two figures representing the BATNA, MLANTA, and WATNA concepts. The first suggests approaches to determining each person’s best, most likely, and worst expected outcomes if they cannot reach an agreement with the other person. Addressing the BATNA, MLANTA, and WATNA helps the participants understand what happens if they do not participate in the conflict resolution process in good faith or if they fail to find a solution by working with the other employee.

The second image below is a blank BATNA, MLANTA, and WATNA chat that a mediator use to record what each participant thinks are the alternatives if no agreement happens. This type of chart is useful for the mediator to track the anticipated options and guide discussions with the parties after the parties have expressed what they think are the BATNA, MLANTA, and WATNA. 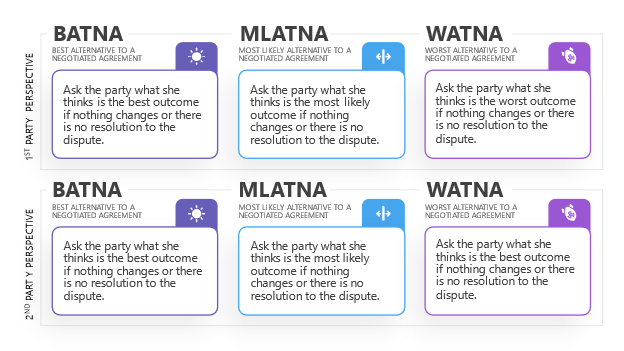 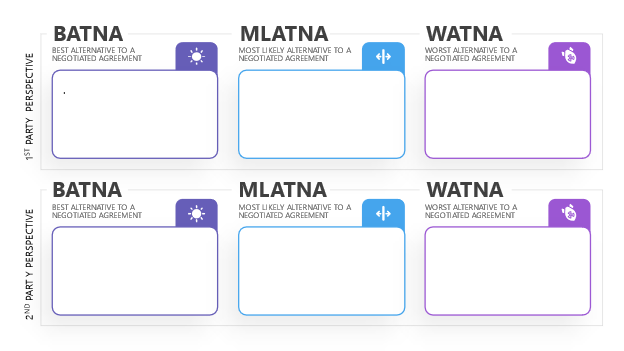 Participants in Separate Rooms Throughout the Mediation Sessions

An alternative to all the participants being present together for at least part of the mediation is for the participants to be in separate rooms throughout the discussions. In this format, the mediator speaks with the parties separately and “shuttles” back and forth between the employees, conveying messages from one person to the other.

A disadvantage of the employees remaining separate during the entire process is that they never get to hear directly from the other employee. In those situations, the employees never get the opportunity to tell the other how they feel directly, and the likelihood that they continue to demonize each other remains elevated.

If the disputants are reluctant to participate in a formal mediation, less formal “Listening Sessions” might be beneficial in helping the parties find a solution to their conflict. Dispute resolution experts use Listening Sessions to help ease team tension and improve team dynamics.

Disputing individuals sometimes do not want notes taken during the Listening Sessions. Instead, they simply want to be heard. The freedom to speak without the comments being documented can open the dialogue and allow the employee to speak more freely than if notes were being taken.

Other times, the individuals are receptive to the idea of notetaking. In these instances, the dispute resolution experts are free to take notes during the sessions. In those situations, at the end of the meeting, the resolution experts still ask what they can share with the other person and what action the employee would like to see them take.